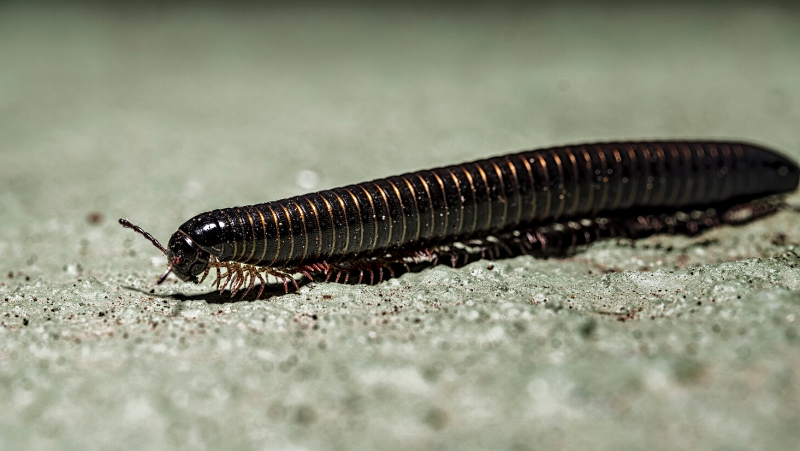 What are Millipedes and how to get rid of them

Millipedes are small, long and cylindrical, generally 20-45mm long. Millipedes have a heavily segmented body with 2 pairs of legs per body segment and a short pair of antennae on the head. While the direct translation of ‘Milli’ ‘pede’ is  ‘thousand’ ‘legs’, the highest record for legs found on a millipede is only 750.

Portuguese Millipedes are easily identified by their smooth, black and shiny body. As a defence behaviour, Portuguese Millipedes coil themselves into a tight and uniform ball to protect their vulnerable underside. Many millipede species secrete foul smelling and sometimes irritating chemicals to deter predators. These secretions can also damage items of the home, especially fabrics and carpets.

Portuguese Millipedes are usually active during Spring and Autumn and are most prevalent after drought-breaking rains. Millipedes are mostly nocturnal and are often attracted to home and garden lighting.

Females lays large numbers of eggs into moist soil. Eggs hatch into juveniles which are similar to adults, only smaller and with less segments. Unlike most native millipede species, ‘Portuguese Millipedes’ can develop into plague proportions.

Moist areas with plenty of dead organic material, mosses, lichens, and fungi used for food and shelter. Most native species live in forests, however, Portuguese Millipedes are common in home gardens.

What Plants are Impacted by Millipedes

Parts of the plant impacted:

How to prevent Millipedes Appearing

Kills snails and slugs in the home garden for several weeks, under all-weather conditions.

Slaters or 'roley poley' bugs curl into a ball when disturbed. They can feed on vegie and flower seedlings and also on roots and soft stems. Here's how to identify and control them in the garden.

Earwigs can damage by chewing on seedlings, flowers, fruit and roots. Here's how to identify and control earwigs in the garden.

If you see large irregular holes or chew marks on leaves and stems, and silvery trails along the ground or on plants, then you have snails or slugs feeding in your garden. Here's how to identify and control them in the garden.