Because it grew in such profusion on the Belgian and French battlegrounds, the red corn poppy, Papaver rhoeas, became forever associated with the First World War. It’s said that the churning of the soil caused by horses’ hooves and soldiers’ boots encouraged never-before-seen displays of these wildflowers. 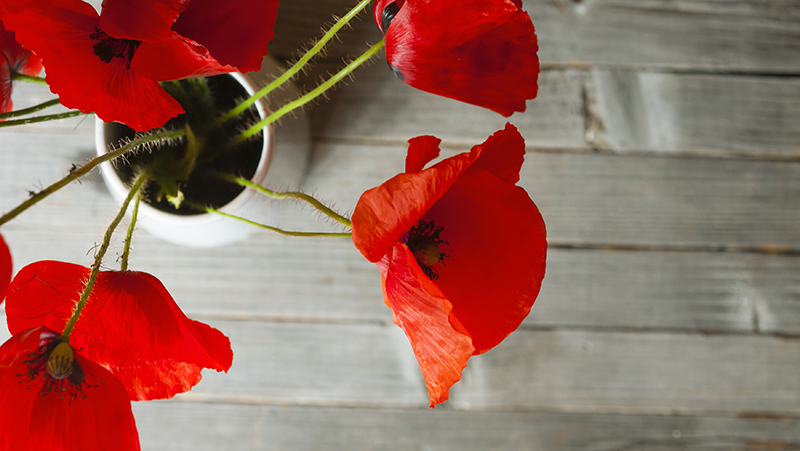 After the ‘war to end all wars’ ended, artificial poppies were made and sold by war veterans to raise money for disabled ex-soldiers. It became a tradition to proudly wear the poppy on Remembrance Day, 11 November. Ever since then the red Flanders Poppy, like rosemary and the Gallipoli Lone Pine, has been grown as a thoughtful memento of those soldiers who died in that Great War almost a century ago.

Flanders poppy grows easily from seed and this time of year, when we’re commemorating Anzac Day, is the ideal time to sow. Poppies don’t transplant happily so it’s best to sow them straight into the garden bed where they’re to grow. Before you start, dig over the bed, breaking the soil down into fine particles. Mix in some Yates Dynamic Lifter Organic Plant Food, and rake to level the surface. Spread a thin layer of Yates Black Magic Seed Raising Mix and scatter the seeds on top. Water carefully, and then sprinkle the barest amount of Yates Black Magic Seed Raising Mix over the seeds. Press to gently firm the seeds into the mix and water again with a fine spray. Seedlings usually emerge within a couple of weeks and, of course, it’s important not to let the bed dry out during this period.

Feed the young seedlings with Yates Thrive Natural Fish & Seaweed+ Plant Food Concentrate half strength at first, then gradually increasing to full strength. Thin the plants to about 30cm spacing. A full, leafy base will always give the best results so, if the plants begin to develop precocious flower spikes, remove these as soon as they appear. Allow the plants to establish and mature and they’ll then produce an abundance of flower shoots. Dead flowers should be removed promptly to encourage more blooms.

Other poppy varieties found in Yates seed range include Poppy Shirley Mix and which is derived from the wild Flanders poppy, have single and semi-double blooms in a range of pastel colours as well as the traditional red.

Poppy problems? The plants can suffer from mildew, so keep Yates Rose Gun Spray Ready to Use on hand for quick treatment. This will also help with controlling insect pests and mites. Poppy flowers can be battered by late winter winds, which means choosing a well-sheltered planting spot is critically important. Snails and slugs can attack the young foliage. Sprinkle Yates Blitzem Slug & Snail Pellets to protect plants.

Little girls might like to try creating poppy dolls. In their simplest form, these are made by bending down all the petals and tying the ‘waist’ with a blade of grass. More adventurous doll makers can try using just the front and back petals for the dress and rolling the side petals into ‘arms’ (again, tied with grass). The round, developing central seedpod forms an appropriate ‘head’.

Specially formulated for trouble-free seed raising in trays (or outdoor seed sowing direclty into the ground) and propagation of cuttings.

A combination of systemic fungicide and contact insecticide. Kills pests and mites on contact and works from within the plant to control black spot, powdery mildew and rust on roses and ornamentals in the home garden.