Suitable for all climatic zones

How to grow bromeliad in a garden

In a garden bed

On backing boards, stumps or supports 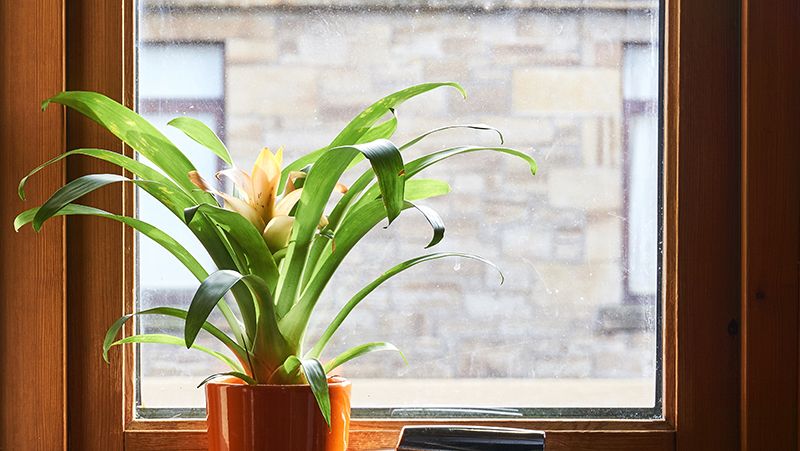 How to grow bromeliad in a pot

The most well known species is the A.imperialis ‘Rubra’ due to its striking green leaves with shiny red/purple undersides. This species can grow to at least 1.2 metres in height and have a width of around 1.5 metres. To add to this grand appearance, when the flower spike does make an appearance it can reach to a whopping 3 metres! This species is a great designer plant and a real talking point in the garden.

Many of the Bromeliads that you see belong to this group. There are many different varieties and species, most of which prefer milder winters and frost free areas. The maximum height varies on the species and can range from 15cm to 2 metres. When in flower during late summer to winter their stems sit high above the foliage adding to their appeal.

This species are available in many different colours including green, burgundy, silver, streaked, banded, variegated or spotted.  In addition flowers spikes come in a wide range of colours including, but certainly not limited to, red, yellow, pink, orange, blue and purple.

The tastiest of all Bromeliads. This species loves the humid warm climates and will take some patience as the fruit is slow to mature.

For an easy to grow Bromeliad you can’t go past the Billbergia spp. These hardy spiny leafed plants are very adaptable and can handle being in the soil and part sunny positions (avoiding the harsh afternoon sun). This is a great choice for a Bromeliad beginner!

This ground dwelling group draw most of their nutrients from the roots and the soil. They love humid environments and frost free conditions. Leaf colours range from orange, pink to green with some varieties having variegated or spotted forms.

Widely grown for its stunning rosettes of plain, glossy green and pink or gold leaves. These can be variegated or pattered in contrasting colours.

Grown mainly for their different foliage than their flowers, this species are great to grow in mass plantings. N. carolinae is the most commonly grown variety due to their colour changing heart right before flowering.

Puyas are more cold tolerant than most other Bromeliads.  P. berteroniana is the most commonly known of this species. It forms a spiny plant that reaches up to 1 metre in height and produces a tall stem of metallic blue-green flowers in summer.

Great for growing indoors or in filtered light conditions. They take their nutrients and water from the air.

This species can be grown indoors or outside and is also a great choice for the Bromeliad beginner. The most common species available is the V. hieroglyphica which has large broad leaves that can reach a height and width of a massive 1 metre! The main feature of this variety are the squiggles that appear in the leaves creating a unique feature for the garden.

Specifically formulated for the successful growing of phalaenopsis and cymbidiums.

Moth Orchids are beautiful and very popular orchids with their stunning and long lasting flowers that come in a wide range of gorgeous colours.

Chain of hearts is a gorgeous trailing plant that’s perfect for hanging pots or baskets. The chains can reach 4m long & the heart shaped leaves are sweet.

For a feature plant in a shady or sheltered area in the garden or even for indoors, Bromeliads provide great foliage colour and form to the garden.

Air Plants literally live off the air & can be grown indoors, hanging from tree branches or balancing decoratively on intriguing objects.