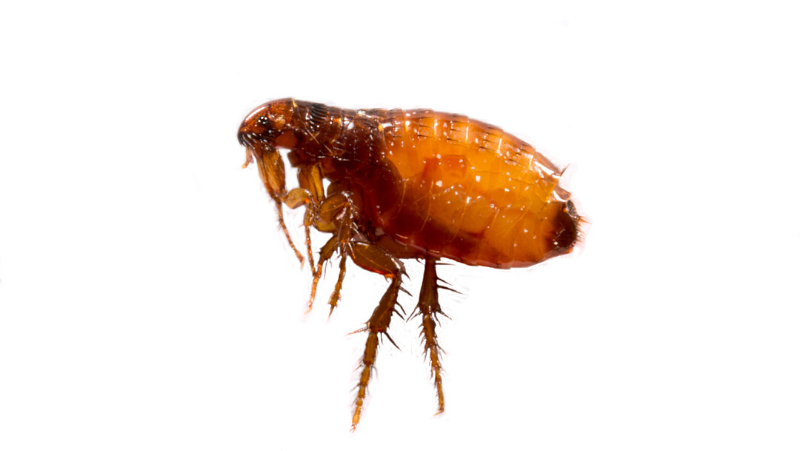 What are Fleas and how to get rid of them

Some may have heard of the fantastic flea circus, but fleas are generally better known for their annoying, itchy and sometimes painful bites. Fleas are parasites and feed on the blood of warm-blooded animals, including humans.

Fleas can spread diseases and parasites. In the 14th Century, fleas were responsible for the spread of the Bubonic Plague, killing more than 200 million people. Nowadays, cat-fleas can transmit tapeworms from dogs and cats to humans; and in rare cases, certain rat-fleas can transmit the disease murine-typhus from rats to humans. Some people are allergic to flea bites while others may develop secondary skin infections.

Given the concerning risks of fleas to human and pet health, plus the potential consequences to mental health, it’s important to prevent and control fleas in the home.

The most common flea is the cat-flea (Ctenocephalides felis) which can live and breed on cats or dogs and also feed on humans.

Fleas are very small insects and depending on the species and age of flea, range in size from 1 to 10 mm long. After engorging themselves on the blood of their host, fleas can swell up to 30% larger than their original size.

The body of the adult is flattened from side-to-side so as to appear very thin and long from above, but mostly oval shaped when viewed from the side. The body is heavily segmented and covered in hairs which face backward. Fleas come in colours of light-browns, reddish-browns and dark-browns.

The head is small with a rounded front. On either side of the head are two, very small, simple eyes. At the front and underside of the head is a row of downward facing comb-like structures which resembles a moustache. At the front and underside of the head are needle-like mouthparts used to pierce the skin of their host, inject a special form of saliva (to prevent blood coagulation) and suck out blood. While fleas do have antennae, they are difficult to see as they are short and often sit into little grooves on either side of the head and behind the eyes. On the back of the neck is a row of back-ward facing comb-like structures. Body hairs, combs and spines help fleas remain safe and secure on their host.

Behind the head, on the underside and middle section of the body (thorax), are three pairs of spiny legs. The hind pair are used for jumping allowing the flea to jump up to three hundred times its height. At the tip of the legs are strong claws used for holding tightly on to their host. Fleas are wingless.

Flea larvae are grub-like, eyeless, legless and hairy. The head is brown and the body is a white-to-cream colour. After feeding on remnant or excreted blood from adults, larvae take on a reddish colour.

After emerging from the pupal stage and feeding on their first bloodmeal, adults are ready for mating. After mating and feeding on blood, females deposit up to 4 eggs at a time. One female can lay up to 100 eggs in her lifetime. Eggs are oval, cream-coloured and very small. Eggs are generally less than 0.5 mm long and similar in appearance to grains of salt. Eggs are laid directly on to a host in a nest and hatch within 1 week. Unlike adult fleas which feed on blood, larvae feed on dead skin; remnant and excreted blood from adult feeding; and other material available on the host. At each of the 4 stages of growth development (instar) larvae shed their skin (moult). After 1 to 3 weeks of feeding and moulting, larvae spin a silk cocoon for pupation which is often covered in skin, animal fur/hair or carpet fibre for camouflage. After pupating, fleas emerge as the adult form. Depending on the species and environmental conditions, the flea life cycle is approximately 2 weeks to 8 months.

Fleas are found anytime of year however peak season is spring and early summer, when conditions are warm and humid, favouring larvae and adult growth and development.

Places fleas can be found:

Fleas are attracted to heat, vibrations, humidity and carbon dioxide, most of which are detected using their antennae. Fleas can remain dormant in the larval and pupal stage for many months without feeding. After disturbance, larvae awaken from a state of hibernation and pupae emerge as adults.

On humans, fleas more commonly bite feet, ankles and legs, whereas on pets, fleas will attack areas where it is warm and moist such as armpits, groin and ear, however bites can occur almost anywhere on the body. Fleas are often found on cats and dogs behind the neck and at the base of the tail.

To properly control fleas in the home, ensure all pets and humans, plus all areas in and around the house and garden, have been thoroughly treated simultaneously. In only one area is focused on at a time, fleas will move from one area to the next, resulting in reinfestation. Repeat the same protocol within a few weeks of initial treatment to ensure any remaining eggs do not hatch and pupating larvae do not emerge as adults.

Control Fleas in the home:

Control fleas on pets and in animal houses:

In humans and pets, flea bites can present as itchy, red, swollen and/or lumps on the skin, typically occurring within 30 minutes. In some cases, a bite may further develop into a blister or wound, sometimes leading to infection. Constant scratching may result in hair loss.

Flea infestation cannot be identified based on the evidence of bites alone. Bites are nearly indistinguishable from other pest attack such as Bed Bugs, Mosquitoes, Spiders, Ticks and Lice. Check pets and all areas fleas are known to inhabit (see habitat).

How to prevent Fleas appearing

Here's how to control spiders in the home, around the garden, and outdoor spaces.