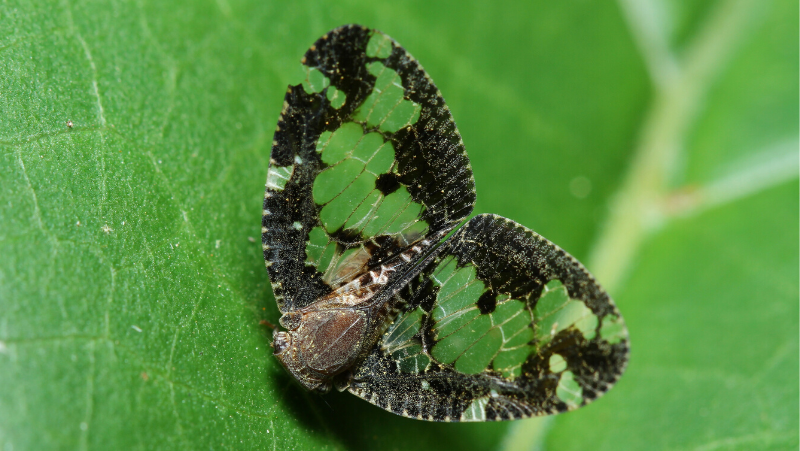 Passionvine hoppers (Scolypopa australis) are an introduced pest species from Australia which can cause great damage to a wide variety of edible and non-edible plants. Populations can skyrocket quickly and if left uncontrolled, can affect plant health, vigour and fruiting, with heavy infestations resulting in plant death.

What are Passionvine Hoppers and how to get rid of them

At the front of the head is a large plate (clypeus), which looks like a large forehead. The ‘face’ is long and extends down to long and thin, piercing and sucking mouthparts. At either side of the head are two large compound eyes and antennae which are impossible to see.

Behind the head, attached to the underside of the middle section of the body (thorax) are three pairs of short legs. Legs are used for walking and jumping. Attached to the upper side of the thorax are two pairs of wings. The forewings are mottled brown and transparent, with brown veins and wing margins giving a lacy brown appearance. While at rest, wings are laid flat and present as a distinct triangular shape.

Nymphs and adults can be found at the tips of stems, often in large groups. When disturbed, both can jump which sometimes produces a loud snapping or clicking noise. Adults use wings for flying and can also jump before flying away when disturbed.

Both adults and nymphs pierce the plants vascular system (phloem) and suck out plant fluids to extract sugars. Excess water and sugars are excreted as a sticky clear substance called honeydew. Honeydew attracts other insects such as Ants which help to protect Passionvine Hoppers in exchange for honeydew, a process known as mutualist symbiosis. Excess honeydew residing on the leaves, stems and trunk of plants can cause a secondary fungal disease called Sooty Mould which can be detrimental to plant health. Honeydew can be attractive to bees and may even cause ‘honey poisoning’ whereby bees gather honeydew, and consequently plant toxins, which is then taken back to the colony. These plant toxins can be harmful to bee colonies and those whom eat the honey.

After mating, females lay eggs in late summer to early autumn, with one generation per year. Eggs are laid inside dead or living stems, leaf midribs and sometimes in bamboo stakes. Eggs are laid in a neat continuous row which are inserted into plant tissue using a sharp tube-like organ (ovipositor). After egg is inserted, pulped plant fibres are used to plug the hole, this plug may remain visible at the surface. Eggs are cream-coloured, oval-shaped and up to 0.87mm long.

Eggs hatch in spring and juveniles (nymphs) emerge. Nymphs are similar to adults, except nymphs are smaller (less than 1 mm in length), wingless and paler in colour. Nymphs are sometimes called “fluffy bums” attributed to the tuft of white fluff (filaments) attached to the tip of their rear (abdomen). These long filaments are sometimes in a circular fan shape and are reminiscent of a peacock’s tail. Nymphs grow through various developmental (nymphal) stages and cast skins (moult) after each of the 5 nymphal stages. Nymphs are prevalent from early spring through to late summer.

After the final developmental stage, adults take a further 2 weeks to mature, and are then ready for mating. Adults are most active from mid-summer to early winter.

Passionvine Hoppers are most active from spring through to early winter and prefer warm and humid conditions. They are often found in large groups and can be found feeding on tips of stems and leaves during the day.

What plants are impacted by Passionvine Hoppers

Passionvine Hoppers mostly attack the tips of the leaves and stems. They secrete a sugary honeydew substance, which attracts a fungus, Sooty Mould. If left untreated, it can cover the whole plant with ‘black soot’ and cause the plant to become stunted, reduce plant vigour and impact fruiting. Passionvine Hoppers have a very broad host plant range, below are some examples.

Edible plants such as:

Non-edible plants such as:

Weed plant species such as:

How to prevent Passionvine Hoppers appearing

Controls a wide variety of insect pests on vegetables, flowers and ornamentals.

Passionfruit Fungal Spot is a serious fungal disease which affects leaves, stems and fruit. It occurs mainly in spring and early summer.

These small, white and winged insects can often be found crowded on leaves of leafy greens and vegies. When disturbed, they fly away in a small plume or 'cloud'. Here's how to control whiteflies in your garden.