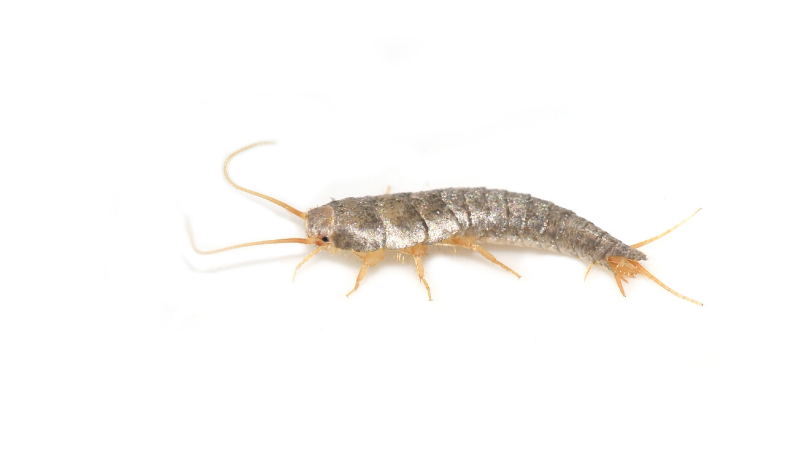 What are Silverfish and how to get rid of them

Silverfish have been around for millions of years and have been found in fossil records as early as the first land-living animals. Silverfish have survived for such a long time because they are known to survive in a variety of very tough environments. Silverfish are best known for their vast destruction of various household items such as books, photographs, artwork, clothing and accessories. Some people may be allergic to the faeces and cast skins (moults) of Silverfish, which may trigger conditions such as asthma.

Although Silverfish are not fast or prolific breeders, they do live for a long time (up to six years!). If left untreated, infestations can reach plague proportions. To avoid damage to property and prevent major infestations, it’s important to control, prevent and monitor for Silverfish in the home.

Silverfish are heavily segmented and soft-bodied insects, covered in fish-like scales. Depending on the age and species, they are between 2 - 18 mm in length, varying in colours of silver, gold, bronze and brown. The body shape is flattened from top to bottom; and when viewed from above, the body is wide at the head tapering to a pointed rear (abdomen). Often around the perimeter of the body are short fine hairs.

Behind the head, on the underside and middle section of the body (thorax), are three pairs of outward facing legs. Silverfish are wingless.

Along the underside and rear section of the body are a series of appendages to help with locomotion and movement. At the tip of the abdomen are three appendages.  The central appendage points directly outwards, while the other two are at right angles to either side of the central appendage.

Silverfish are fast runners; they can also jump and hop. When disturbed, silverfish either sit very still or swiftly scurry away. Silverfish also have an interesting and elaborate mating ritual.

After moulting and mating, adult females lay eggs in clutches of 7- 12 eggs, laying up 60 eggs at a time. In one lifetime, a female lays approximately 100 eggs. Eggs generally hatch within 20 days, however in sub-optimal conditions, they can take up to 40 days. Eggs hatch into juveniles (nymphs) which are similar in appearance to adults, only smaller and lighter in colour. Juveniles grow through 6 - 7 growth phases, shedding skin at each phase. Juveniles take 3 months to 3 years to reach full maturity. Silverfish can live for up to 6 years and continue to moult throughout their lifetime.

Silverfish are attracted to materials containing starch, sugar and protein. They also feed on dust, debris, dead insects, dead skin cells, algae, lichen and fungi. Silverfish can survive for many months without food.

Silverfish prefer dark, warm, humid and undisturbed places. They are most active during the warmer months at night and hide throughout the day.

In outdoor environments, Silverfish can be found in bird and ant nests; and underneath stones, leaves and other debris such as piles of timber.

While in the home, Silverfish are often found in:

Silverfish hide in the crevices, seams and junctions of:

Silverfish feed on various household products and items such as:

As Silverfish are highly mobile insects, it is important to treat all areas of the home simultaneously. This will prevent Silverfish moving from one area to the next and starting a new infestation. Once the home has been adequately treated, repeat the same protocol within a few weeks of initial treatment. Continue to follow preventative practices, control measures and monitor for further signs of infestation.

To control Silverfish in and around the home, spray Blitzem! IndoorOutdoor Barrier Spray Ready to Use. These products kill Silverfish on contact and provide a barrier of control for up to 2 - 3 months. Spray all surfaces within wardrobes and cupboards, do not apply to clothing or bed linen.

For delicate fabric items and precious papery items such as books and photographs, take the item outside and brush off and squash any eggs, nymphs or adults that may still be on the item. Place the item into a plastic sealable bag, then seal well to avoid too much moisture getting into the bag. Place item in the fridge for at least three days to kill off any Silverfish. Please note, freezing may cause further damage to the item due to condensation.

For more durable fabric items, place into the washing machine and wash using hot water, then either place in the dryer on the hottest setting for more than half an hour; or hang on the line on a dry, hot and sunny day.

Vacuum and/or steam clean fabric furniture and carpets to kill Silverfish and to reduce dirt and grime build-up.

Hygienically clean the interior of the home.

Typical damage of Silverfish to household items include: irregular chewed holes and chewed trails from feeding on papery and fabric items. Damage can be confused with Carpet Beetle and Clothes Moths. Snails damage to papery items is also similar, however snail damage is often accompanied by silvery trails and long skinny poos.

How to prevent Silverfish appearing

Prevent Silverfish from entering the home:

Reduce the environment favourable to Silverfish:

Here's how to effectively kill and control cockroaches in your home and outdoor areas.

Holes in furniture, clothes, bedding, curtains, clothing and fabrics are the work of the clothes moths. Here's how to identify them and control them in your home.

Here's how to recognise and control carpet beetles in your home.