November’s a wonderful month for planting warmth-loving vegetables, especially those with tropical American origins such as beans, pumpkins, sweet corn and members of the solanum family. As well as potatoes and tomatoes, the solanum group includes capsicums and chillies. 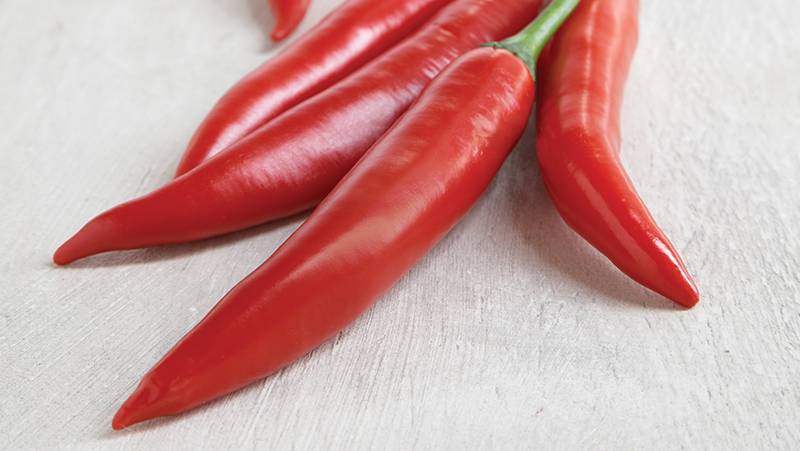 Collectively known as peppers because of the heat produced by many of the genus, capsicums and peppers were spread all over the world following the Spanish conquest of South America. Chillies, particularly, became an integral part of the diet in places like the Indian subcontinent and much of Asia and Europe, especially Eastern Europe and the Mediterranean. Paprika, always associated with Hungarian goulash, is derived from hot chillies.

The chillies, or hot peppers, owe their hotness to an ingredient called capsaicin. Most of the capsaicin is found in the pith area around the seeds and its relative heat is measured on a scale of Scovilles. Some chillies are so hot they can be dangerous and must be handled with care. It’s especially important to wash hands well after handling chillies and to make sure that chilli juice never gets near eyes or other tender parts of the body.

Chillies grow on relatively small plants so are ideal for pots. Generally, too, the fruit is needed in small numbers, which also makes them even more suited to pot culture.

What we call capsicums are what the Americans call ‘bell peppers’. They have mild-tasting fruit that becomes sweeter as it ripens. Capsicums are grown very much in the same way as their close relatives, tomatoes. They need full sun, rich, well-drained soil and regular fertilising. They can be grown in good-sized pots but it’s probably easier to grow them in the ground.

Prepare the soil by digging in compost or aged manure. Add some organic-based fertiliser such as Yates Dynamic Lifter Organic Plant Food. Check drainage – if the soil is heavy, it’s best to build a raised bed to ensure the water moves away readily. Now that the soil is warm, seeds can be sown straight into the soil but many growers prefer to start them in pots of Yates Black Magic Seed Raising Mix for transplanting into the garden.

Feed with Yates Thrive Tomato Granular Plant Food as the plants grow, and make sure they are well watered. A layer of organic mulch such as bark chips or pea straw will help hold moisture in the soil. Capsicums are usually self-supporting, but heavy crops may require some support for the plants. Take care when hammering in stakes – keep them well outside the root area.

Watch out for sap-sucking pests and caterpillars and treat with Yates Nature's Way Organic Citrus, Vegie & Ornamental Spray Ready to Use when you see them.

Capsicums can be harvested when they are green, but it’s best to wait until the fruit walls are firm and strong. Or they can be left to develop their mature colouration. Yates seed range includes a lucky dip selection of variously coloured capsicums. It’s fun to grow them and see what you end up with. Try Capsicum Colour Salad Selection, Capsicum Corno di Toro or Capsicum Giant Bell.

Specially formulated for trouble-free seed raising in trays (or outdoor seed sowing direclty into the ground) and propagation of cuttings.

Specially formulated to grow all types of tomatoes. With high potassium for more prolific, tasty tomatoes and calcium to help grow strong tomatoes.

How to prune your roses

Let's take the guesswork out of pruning your roses. Here's how to prune so they continue to perform beautifully in your garden.